The Disappearance of Dragons (Plus a New Quest)

Just as I believe in the magic of this world, I also believe in creatures that we may never have the chance to meet. Take dragons for instance. A question that comes up frequently in my letters is whether I would like to have a dragon as a pet. That’s one question I never have trouble answering, since NOBODY has a dragon as a pet, only as a friend! And they are very special friends to have indeed — dragons are highly selective about the company they keep. They are incredibly wise and are fluent in many languages, including those of elves and fairies.

This, of course, comes from the tales told to me by Merlin, as I have yet to meet a dragon in real life. Unfortunately, that seems to be the case with so many other wonderfully mysterious creatures of this majestic planet — with the problems facing our environment and other factors, many of those creatures that we might have called friends have disappeared by way of extinction.

Among my journeys, I have met numerous heroes on their path to protect these vulnerable creatures, and I invite you to join them by embarking on the Endangered Species Quest below.

This quest will take you on a learning adventure to discover what it means for a creature to be endangered, as well as help you discover ways you can be a young hero by protecting vulnerable species through your own actions. It is my greatest goal to inspire young heroes to take action towards causes in which they believe!

My national award, The Gloria Barron Prize for Young Heroes — awarded to public-spirited kids from every background who have done outstanding service work for people and the planet — is all about turning the spotlight on young people who are changing the world through their actions. Why? So their stories, inspiring examples of how one person can make a positive difference, can be shared by others. 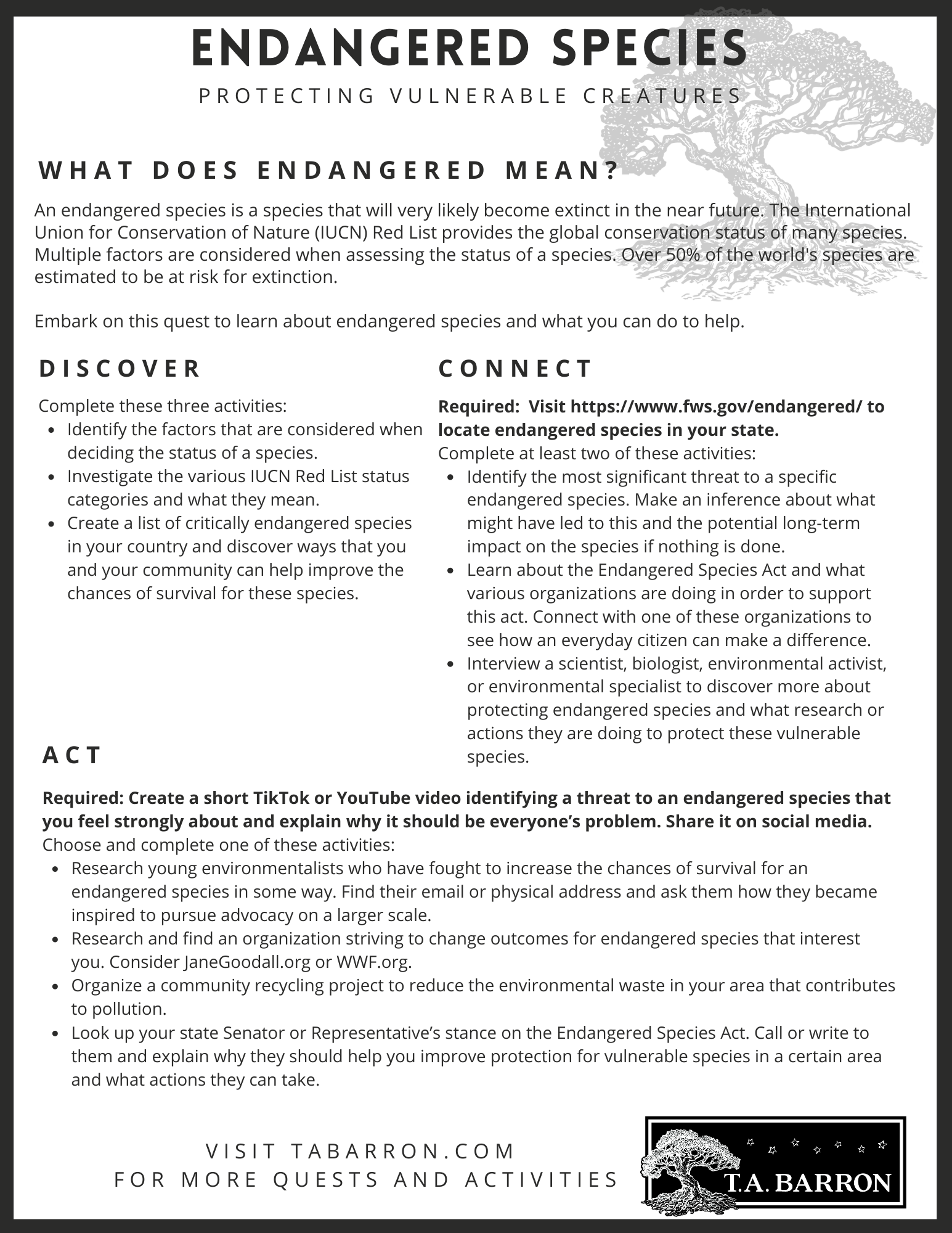 One of these inspiring young heroes, Genevieve Leroux, has been making strides toward protecting one endangered species — Monarch butterflies. She started Milkweed for Monarchs, a movement that focuses on the planting and nurturing of milkweed plants — monarchs’ sole food source during their caterpillar phase. I encourage you to continue your Quest beyond the worksheet above and learn more about what other young heroes are doing to protect endangered species by visiting InspiringYoungHeroes.com.

Visit the Quests section of my blog for more quests to complete on your journey to becoming an inspiring young hero!