Merlin on the Wind

I am thrilled to share this article I wrote for the Aug/Sept 2017 edition of National Geographic Traveler magazine. The article is featured in a section titled “British Accents” and includes a selection of beautiful photographs and stories about the British countryside, including this short essay about the mythical land of Merlin – Wales!

Stand on the ridge of Cadair Idris, in Wales’s Snowdonia National Park, and listen closely, and you can almost hear the calls of ancient voices carried on the winds, the chords of plaintive harp strings, and the names of legendary folk whose tales were first told here centuries ago—names like Merlin, King Arthur, Rhiannon, and the Lady of the Lake. Plus many more Welsh names, some seriously hard to pronounce.

The name of this mountain was inspired by the mythological giant Idris, who was said to sit atop the summit, recite epic poetry, study the stars, and philosophize about the universe. Standing on that ridge, I could almost feel the giant’s presence, as if he were still sitting up there, watching me. And I could sense why some folks say that anyone who stays overnight on Cadair Idris will awake as either a raving lunatic or a gifted poet, if they wake at all.

Legends about the great wizard Merlin have inspired many of my travels in Wales. For years I’ve swallowed those stories as eagerly as a hungry guest at a pub eats Welsh rarebit. I love to walk on the same paths as the many bards who have told those tales—and to feel for myself the enduring magic of Merlin.

Sometimes on those walks, I’ve learned practical things not found in any legends. On one trek through the hills, I kept seeing signs to some mysterious destination called Llwybr Cyhoeddus. Practically every quarter mile stood another sign to that place. What was it? I wondered. A village, a castle, a waterfall?

Finally, a friendly Welshman out for a stroll in his muddy boots answered my question. “Public Footpath,” he translated. 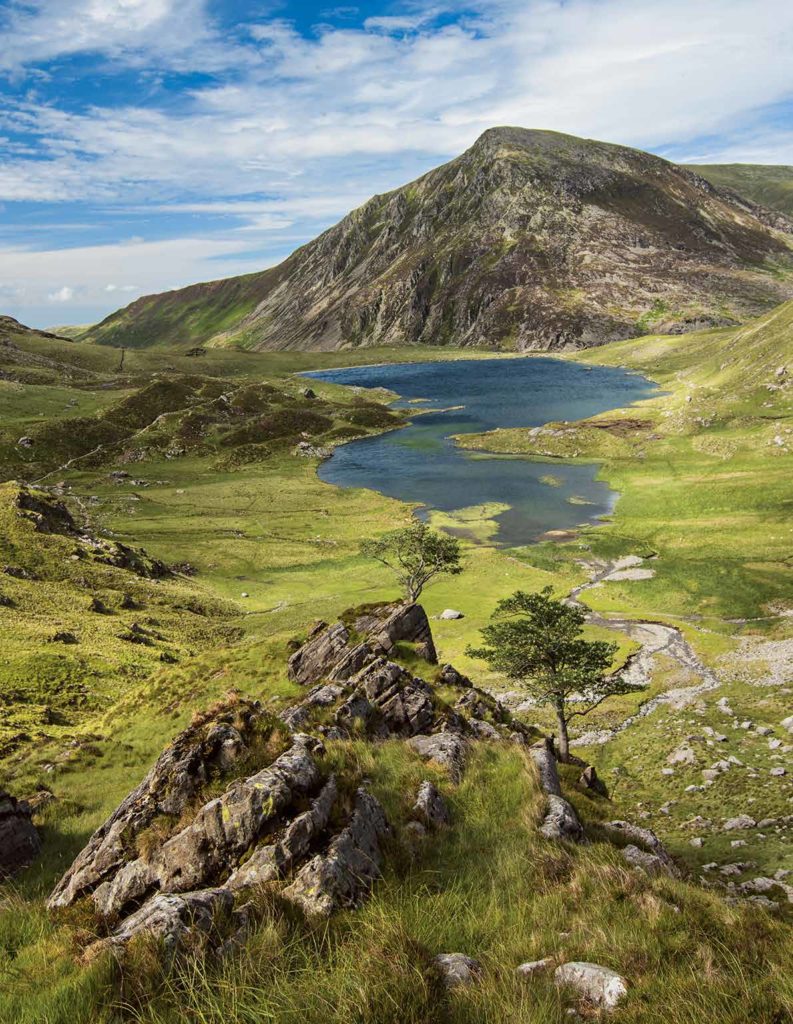 One of my favorite walks is on Dinas Emrys, a hill rich with Merlin lore. Overlooking the village of Beddgelert in the Glaslyn Valley, it’s believed to be the site of the warlord Vortigern’s castle, which kept crashing down no matter how often it was rebuilt. It took Merlin to figure out why.

Weak timbers or a leaky roof? No. Merlin revealed that two dragons, one red and one white, slept beneath the castle. Released from the castle, they engaged in an epic battle. Merlin correctly predicted the winner, inspiring the famous Welsh symbol of the red dragon.

Adding to the allure, local folk will tell you that Merlin left some precious treasure (including a golden cauldron) hidden in a secret cave on Dinas Emrys. When just the right person searches for the treasure, the mouth of that cave will open at last.

Another place where you can feel the wizard’s presence is Carmarthen, the oldest continuously occupied town in Wales, known at one point as Caerfyrddin—“Merlin’s fort.” History pulses in every side street and stone rampart, including the most westerly amphitheater in the far-reaching Roman Empire.

Near Black Mountain in Brecon Beacons National Park, Llyn y Fan Fach, the legendary home of the Lady of the Lake, calls to any traveler’s imagination. What enchantments may still linger in that water, so cold it will make your teeth chatter?

If your wandering takes you west of there, listen for the echoing cries of the birds of Rhiannon. Ancient Celtic lore celebrates this bold woman who galloped over the hills and vales on her white horse, accompanied by her magical birds whose songs had great power, including the ability to wake the dead.

Take time to explore the four Welsh castles that compose a UNESCO World Heritage site: Harlech, Caernarfon, Conwy, and Beaumaris. Beaumaris Castle is known for its perfect symmetry. You might call it a fairy-tale castle— unless you happened to be an attacker centuries ago who passed under the murder holes of the main gateway. Then you were likely to get a barrel of boiling oil poured on your head.

Wherever you go in Wales, you will find, as I have, that its most compelling bards are its people. Just order a pint of the local brew at any pub and you’ll meet some of these generous and affable folk. Ask them about their local life as well as their favorite tales. Maybe you’ll hear the tragic story of Blodeuwedd, a woman made of flowers, or the comical one of Twm Siôn Cati, the Welsh Robin Hood.

Tintern Abbey is one of my favorite jewels in the Welsh crown. Built in the 12th century, it’s now a ruin. Yet those soaring Gothic arches, towering over the Wye River Valley, still ring with half-remembered chants and prayers. And with other sounds too. The poet William Wordsworth came to this haunting place and heard its “mountain-springs With a soft inland murmur.”

So listen well as you roam Wales. Who knows what long-lost voices you’ll hear on the wind?