T.A. Barron: From Colorado to Camelot 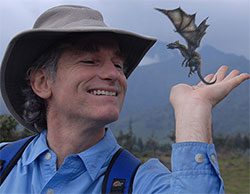 Thomas Archibald Barron — called just T.A. by his many faithful readers — is a Colorado author who seems to evoke the state with every page. There’s a natural resonance to his work, whether it’s a young adult Arthurian fantasy or a nonfiction book on the environment. A resonance that is both intentional and important.

Barron will discuss his newest Merlin Saga book, Giant: The Unlikely Origins of Shim, in an online event on Monday, November 1. We caught him while he was gearing up for that digital delve with devoted fans, and talked about writing, myth, nature, Camelot and Colorado.

You’re presenting your new book, Giant, in connection with the Boulder Book Store on November 1. What do you have in mind for that online event?

I’m always deeply grateful for the chance to share one of my stories with creative, caring people. So I hope to make this event feel warm and inspiring for folks…which is hard to do virtually, but that’s my goal. The setting is my writing room, which feels like part library, part warehouse for hiking and camping equipment, and part Merlin’s Crystal Cave. And maybe also part art gallery full of fun creations made by fans around the world.

We’ll begin with my description of Giant and the story’s origins. Then I plan to give folks a glimpse of my quirky writing process. After that I’ll read a passage from the new book. And then I’ll answer questions from the audience — always my favorite part of these events. 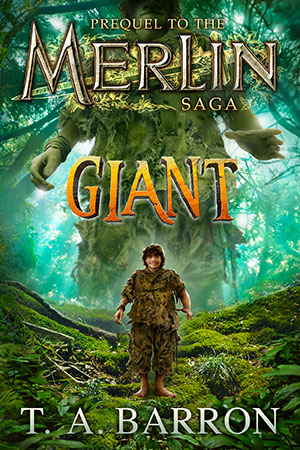 This is the prequel to your Merlin Saga series. How did the idea for this book come about? Why a prequel?

For many fans of the Merlin Saga, their favorite character is Shim, the tiny little guy who is totally convinced — against all evidence — that he’s really a giant. Well, he ultimately discovers that being a giant is about more than just the size of your bones.

Over the years, I’ve gotten so many questions from people, including the people working on the Disney movie, about Shim and his mysterious origins that I decided, well, now is the time to tell that story. And I really wanted to tell it in a way that made a stand-alone book, so nobody would need to have to read the other twelve books in the series to enjoy this one. So I made it the prequel.

What in the overall Merlin Saga storyline do you think has struck a chord with readers? What in our shared world today makes that particular story attractive?

There are two core ideas in the Merlin books that resonate with people around the world: the magic in every person and the inspiration of nature.

The whole series begins when a lone boy washes ashore, half-drowned and barely alive, with no memory at all of his own identity. He doesn’t even know his own name! That he even survives this terrible day is a miracle. And that he might someday become the greatest wizard of all time, the celebrated fellow we call Merlin, is an even bigger miracle. Beyond the story itself, all of that is a powerful metaphor for the hidden potential in every person.

I really believe that everyone has some special magic down inside. Even if they haven’t yet discovered that magic, it’s there. And that’s true regardless of age, gender, background or any other description. So everyone has the potential to find that magic… and to use it to help themselves and the world.

The other core idea is the enduring power of nature. Nature gives us sustenance as well as healing and renewal and inspiration. Just take a look at our mountains here in Colorado, and how can anyone not feel inspired? That’s why I make sure that nature is more than just the setting for my books — it’s actually one of the characters. I want the places in my books, even if they’re imaginary, to feel utterly real for a smart reader. And I also want to convey the environment’s beauty and wonder and inspiration.

Given those inspirations, how’s the upcoming Disney film adaptation going? Has it been a positive experience overall? Any growing pains in the translation from page to the screen?

Well, the best news is that Disney has brought together an awesome team of people to make the Merlin movie — including producer Gil Netter (Life of Pi and The Blind Side), writer Chris Weitz (Rogue One: A Star Wars Story, The Golden Compass, Twilight: New Moon and Disney’s Cinderella), and previously, writer Philippa Boyens (who won an Oscar for her work on the film scripts for The Lord of the Rings).

Sometimes I’ve felt like Merlin’s wild adventures in my stories are nothing compared to my own wild adventures getting this movie made! But some aspects of that are true for any creative process. Most important, I feel deeply pleased that the Disney folks have stayed true to the key elements and core values of the books. So I’m quite sure that Merlin, wherever he is right now, is feeling very good about the whole thing!

You beat me to mentioning Colorado. You weren’t born here, but you’ve spent much of your life in the state, most notably your youth. Where did you grow up, and how have those experiences, that sense of place, shown up in your writing?

I was lucky enough to grow up in places where I could always explore a mountain stream or climb a tree or just cover myself with mud, which I did often. One of those places was a small New England town with lots of apple orchards, the other was a Colorado ranch in the shadow of Pikes Peak. Both places invited me to get outdoors and roam…not just physically, but also spiritually.

After a big snowstorm when I was seven or eight years old, I wanted to play in the fresh snow. So my mom dressed me in one of those big puffy snowsuits that made me into a waddling balloon and took me outside. The snowdrifts were so tall they towered over me. Then my mom surprised me by patting a snowdrift and saying, “Believe it or not, there are flowers under there. You won’t see them until next spring, but it’s true.” At the time, I thought she was crazy. Flowers? Really? But eventually, I realized that she was right — and that her comment was about more than just the changing of the seasons. It was about nature’s amazing power of transformation. And also…about hope.

Sounds like that was a lesson that stuck with you.

I’m amazed how it’s possible to feel, in wilderness, both very, very small and very, very large — at once. We can feel dwarfed by the immense sweep of the stars overhead, the towering trees of an ancient forest, or the endless expanse of the ocean. And we can, at the same time, feel enlarged by our connection to it all. Humbled and inspired at once. We are very small…but also part of the grandeur, the pattern, the mystery.

You’ve written for several literary age brackets — do you have a favorite? What are the benefits and challenges for each genre?

Basically, I just write stories that I’d like to read. Sometimes that’s an epic fantasy adventure where the entire universe is at stake, sometimes it’s a nonfiction book about heroic young people, sometimes it’s a shorter tale for children. And sometimes it’s a nature book with a great photographer that gets me out for long hikes to explore some magical places.

The best part of this writing craft is that you can always find ways to grow. To expand your abilities to communicate stories and ideas. So my voice as a writer has certainly evolved. But I would add that everything I write has three essential parts — an unlikely hero I love, a magical place I want to explore, and a big idea that calls to me compellingly.

Where do you do most of your writing? What places here in Colorado inspire your creative side?

Well, I still write all the first drafts of my books by hand. Yes, even the big fat novels like The Great Tree of Avalon trilogy started out as handwritten scrawl on note pads. Why in this modern age of high tech would anyone do that? Because the chemistry works for me. Maybe it brings me back to the creative mindset of my childhood, when I was writing my very first stories and poems, leaning against an old apple tree. Sure, this system isn’t the most efficient…but it’s worked now for over thirty books, so I will probably stick with it. At least for my next thirty books.

This might surprise you, coming from someone who often writes about wildly imaginary characters and places — but my best ideas come from real life. From observing the world closely. If someone really pays attention, really notices, then their senses are more alive and their minds are full of ideas. That amounts to a whole lot of source material! Just add a pinch of imagination…and anything, literally anything, is possible.