The Crazy Story of How I Met Madeleine L’Engle 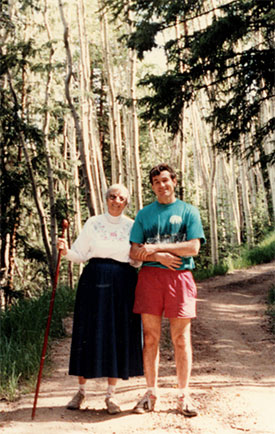 If you walk in the direction of your dreams, you open yourself to serendipity, and good things will happen. Maybe the best example I can give you of this is how I met Madeleine L’Engle.

I had just received the latest of thirty-two rejection letters for my first attempt at a novel. I was, as you can imagine, a bit depressed—and very doubtful about the likelihood of ever becoming a published writer. By chance, I happened to talk with a friend in Colorado who worked at a children’s museum. She’d just done an exhibition of famous people’s childhood toys—and her favorite items were from Madeleine L’Engle, who had contributed her teddy bear along with a story about the bear’s life. “I’ll send you the story,” she offered. “Maybe it will cheer you up.” “Sure,” I answered, not at all convinced.

The story, typed on the stationery of Madeleine’s publisher, Farrar, Straus & Giroux, was indeed delightful. Even in my depressed state, it made me smile (for at least two or three seconds). As I sorted through the rest of that day’s mail, however, I found another envelope addressed to me— from someone at FSG. Just to give you a sense of my mood, I realized that FSG was one of the very few publishers to whom I hadn’t sent the manuscript and my first thought was, “Bummer! They’re rejecting me in advance. They’ve heard about my terrible manuscript and now they want to reject it before they ever see it!”

But I was wrong. To my astonishment, it was actually a letter to me—from Madeleine L’Engle. Written on FSG stationery, it read: “Dear Tom Barron, I have heard from our mutual friend that you would like to write books, but haven’t found any success with publishers. I thought you’d like to know that my book, A Wrinkle in Time, was rejected by forty-two publishers before it was finally accepted.” (My immediate thought was—hey, that’s ten more tries!) She went on to say, in a soaring conclusion, “Keep writing, keep trying. And if you persevere, I promise that you, too, will find your voice.”

I was ecstatic. The first thing I did was call my friend to tell her the good news, but she wasn’t home. So I called, well, everyone else I knew. My parents, my college roommate, my friends near and far. I even read the letter aloud to the doorman in my apartment building. Finally, I caught up with “our mutual friend” and told her the news. I jabbered on and on, but strangely, she was totally silent. So I asked, “Is anything wrong?” She sighed, then answered, “I just didn’t think you were that gullible.” Suddenly realizing what she had done, I gasped with astonishment.

That’s right: forgery. Major forgery! She had copied the FSG letterhead and written the letter—as a joke. A not very funny joke.

For several weeks, I walked around with a dark cloud over my head. Then, one night, I realized there was a silver lining. Because of this terrible hoax, I now knew how to get in touch with one of my favorite writers. So I sat down and wrote her a letter:

“Dear Madeleine L’Engle, This is a thank-you letter—first, for all the wonderful books you have written; and second, for the warm and encouraging letter you wrote me, which is attached. Now, you may not remember writing it, because in fact, you didn’t. But it sure sounded like you. And it gave me exactly the hopeful message I needed. You see, I have always wanted to write books…but instead, I’m stuck in New York, wearing a business suit. And so if you are ever in New York, I would be deeply honored to take you to lunch.”

Then I added: “P.S. If you do answer this letter…please have your signature notarized. I just can’t handle going through all this again.”

It felt good to write the letter, but never in a million years did I expect an answer. To my surprise, I received a postcard. It read: “Dear Tom Barron, I live in New York. Call this number, and let’s have lunch.” Signed: Madeleine L’Engle—signature notarized.

We did have lunch—which lasted seven whole hours. And that began a marvelous friendship for which I’m deeply grateful. Long live serendipity…and notarized signatures!