Photo credit: Chiiori Alliance & Trust
At some point in your life—whether as a student, after a graduation, between jobs, or beyond—I hope you will have an opportunity to travel.  Whether you venture somewhere near or far…that travel could change your life.  And the change may come in a surprising form—even something as unlikely as a bowl of noodles.

I’ve been fortunate enough to travel to many amazing places over the years, from exotic and remote countries around the globe to vibrant cities and wilderness areas here in the USA.  And I’ve found that whether I’m in the Himalayas, Africa, or New York City, each place I visit leaves its mark on my soul.  The sights and sounds, the wondrous scenery and vibrant colors, and the delightful people everywhere—all have become part of me forever. 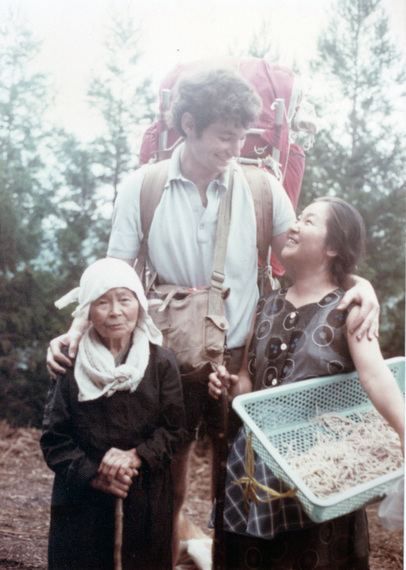 A college-aged me with Takemoto-San & her mother — Japan, Summer 1975

Some years ago—41, in fact! – I had the opportunity to visit Japan.  I was a fresh-faced kid right out of college, eager to see as much of the world as possible, and hoping to spend every penny of my earnings from summer jobs on travel.  Why was Japan a high priority?  I’d been invited by a good friend, someone immersed in Japan’s ancient cultural traditions, to go to a remote village on the island of Shikoku—to work, if you can believe it, as a roof thatcher.

That’s how I found myself in the remote valley of Iya, a place where farmhouses with thatched roofs and rice paper doors covered in calligraphy dotted the steep hillsides.  Layers of rising mist and twisted red pines made the surroundings look like an ancient Japanese screen painting.  Smoke from cooking fires scented the air, and I could often hear bamboo wind chimes clinking in the breeze.

One of those farmhouses, long abandoned at the edge of a small village, was to be the site of a traditional roof thatching guided by Shinto elders–something that hadn’t been done in Japan for many years.  My destination!  I knew from the start that this would be a truly remarkable cultural experience.  What I didn’t expect, though, was how the kindness of one particular woman would transform everything.

Her name was Takemoto-San.  A small but sturdy woman in her mid-forties, she had lived her entire life in the village.  During my first week, she watched me with curiosity.  (I wasn’t hard to miss, since I was more than a foot taller than all the other people who were working on the project.  On top of that, I was the clumsiest person around – which soon earned me the nickname O Chocku Choi, meaning something like “Honorable Butterfingers”.)

Noticing that I cleaned every particle of food out of my bowl at the end of each long day, one evening Takemoto-San walked over to me and handed me an extra bowl of noodles.  When I smiled and thanked her, she smiled back and gave me a deep bow.  That’s how our friendship began.  For the rest of the summer, she watched out for me, introduced me to other villagers, sang Japanese songs, and helped me to feel at home in this place so far away from my family in Colorado.

When, at last, we finished thatching the roof, the elders spoke Shinto blessings and clapped their hands three times.  Looking from the completed roof, which gleamed in the sunlight, to the many Japanese faces around me, I felt a rush of immense gratitude.  But I also felt a growing sadness in my heart.  It would be hard to leave this beautiful place and my new friends—especially Takemoto-San.   Catching my eye, she said to me quietly, “You must come back some day.” 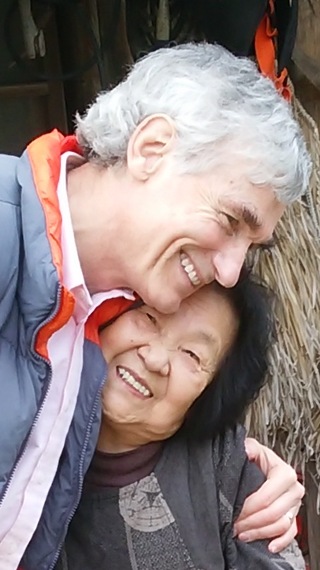 A few months ago, my life’s journey took me back to Japan, where the books of The Merlin Saga are much loved.  This was my first time back in Japan since that glorious summer of 1975.  Although I’ve never forgotten Takemoto-San, or her great kindness, we had never written or spoken since the day I left her village.  So I had no idea whether she was even alive—or, if she was, whether she still lived in the same house, let alone on the same island.  Yet I simply had to return to Shikoku to find out.  As I approached the village that I’d thought about so many times over the past four decades, I wondered whether I’d actually find her.  And if so, would she remember me?

Outside her old house was a lone woman, well into her 80s, sweeping some dirt off the stones with her handmade broom.  I walked toward her, and she looked up at me, surprised.  It was her, I was sure of it!  But I could tell that she had no idea who I was.  Drawing closer, I pulled out an old photo from 1975, showing the two of us standing together (along with her mother, who is even smaller).  She looked at the photo and then at me—and all of a sudden she realized who I was.  She burst into tears…and so did I.  What a gift to see her again!

I told her, “You said I must come back some day.  So I did.” We talked a bit—difficult, since neither of us could speak much of the other’s language.  Yet everything important we needed to say was communicated by our expressions.

When it was time to go, I gave her the old photo.  She held it tight to her chest and gave me a teary smile.  Once again, I was filled with gratitude—thankful that life had brought us together again after all those years.

I hope that your travels bring you extraordinary sights, unforgettable tastes and smells, and surprising discoveries.  And may those travels also bring you something as precious as a simple bowl of noodles from a friend.

This blog entry was originally published on The Huffington Post.