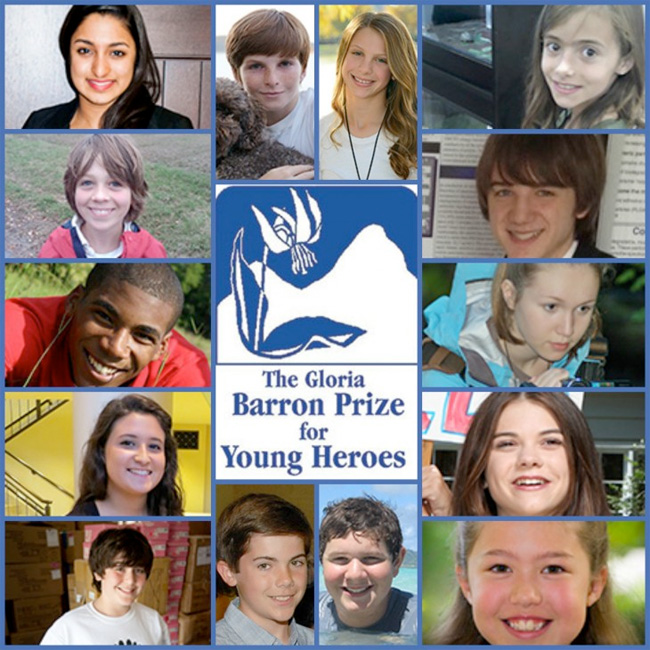 Nothing is more uplifting than stories about heroic people who have truly made a difference to the world. So I’m thrilled to announce this year’s winners of the Gloria Barron Prize for Young Heroes! The prize honors outstanding leaders between 8 and 18 years old across America who are making a positive difference to other people and our planet.

These young leaders represent the great diversity of the United States. They are female and male, urban and rural, and from many backgrounds. As Barron Prize winners, they will each receive a $5,000 cash award to support their service work or higher education.

We need our heroes today more than ever—not celebrities, but heroes with inner qualities like courage, perseverance, compassion, humor, humility–whose character can inspire us all. That’s what the Barron Prize is about: shining the spotlight on these amazing young people so that their stories will inspire others.

Teagan, age 13, of California, who created Shred Kids’ Cancer, an organization to support kids fighting cancer that has raised over $100,000 for pediatric cancer research through its annual battle of the bands for young musicians.

Charles, age 17, of Georgia, who founded Greening Forward, a non-profit that provides networking, mentoring, and funding to young environmental change-makers. Charles has raised $100,000 and has granted $30,000 to his peers.

Lulu, age 14, of California, who created LemonAID Warriors to help kids hold philanthro-parties and turn their everyday gatherings into opportunities to help others. She has raised over $60,000 through her own charitable events.

Josiah, age 13, of Montana, and Ridgely Kelly, age 12, of Maine, who founded Save the Nautilus to raise awareness of the plight of the nautilus, one of the Earth’s oldest creatures. The boys have raised over $11,000 to support nautilus research and are working to get the animal listed as an endangered species.

Sruthi, age 18, of California, who started the Mitty Advocacy Project, a network of over 1,000 students lobbying legislators to support bills that help the less fortunate by addressing social justice issues such as poverty and immigration.

Jack, age 16, of Maryland, who has invented an inexpensive dipstick-like sensor for the early detection of pancreatic, ovarian, and lung cancers. His test is 168 times faster and 26,000 times less expensive than the current one.

Dylan, age 15, of California, who founded ReefQuest, an environmental conservation and education initiative committed to protecting the world’s oceans and coral reefs. Over 60,000 students in 48 countries are using his Virtual Reef as a platform for citizen science.

Isabelle, age 9, of Texas, who created the non-profit Paper for Water and has raised nearly $175,000 to fund over 30 wells in developing countries by creating and selling handmade origami ornaments.

Gabrielle, age 16, of California, who created Donate Don’t Dump as a way to get surplus food donated to the hungry instead of dumped into landfills. Her teen-run group distributes 20,000 pounds of donated food each month.

Nick, age 15, of Rhode Island, who founded the Gotta Have Sole Foundation, which has raised over $175,000 and collected more than 6,500 pairs of new shoes for over 10,000 children living in homeless shelters across the U.S.

Cassie, age 10, of California, who has raised money to fund the planting of more than 7,800 trees by creating clay sculptures, artwork, and jewelry, which she sells to her classmates.

Ariana, age 13, of Texas, a nationally ranked triathlete who formed Team Ariana as a way to redirect corporate sponsorships away from her and toward her cause of homelessness. Her team has raised over $50,000 for the homeless.

Miranda, age 13, of British Columbia, an award-wining environmental filmmaker who has created ten films on topics such as reducing the use of plastic and disposing of e-waste ethically.