Inspiring Youth To Make A Difference:Announcing The 2014 Barron Prize Winners 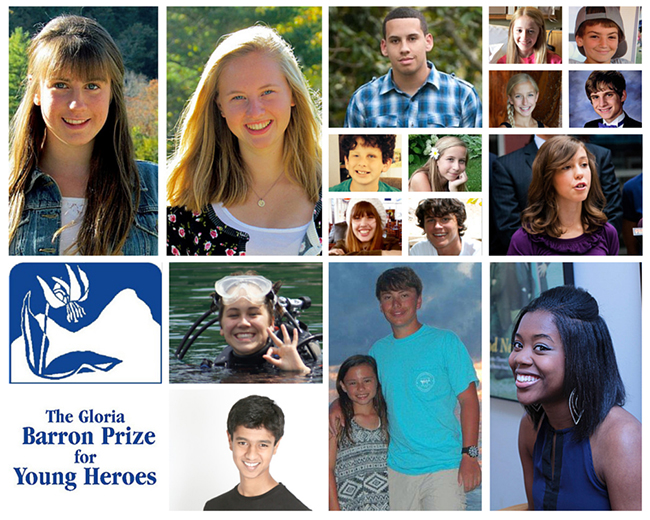 Every person, no matter how young, can contribute to making the world a better place. The mass media gives our kids all sorts of negative, demeaning messages — telling them their self-worth comes from what they wear or drink or drive, not who they really are down inside. We need our heroes today more than ever — people whose character can inspire us all.

It is for this reason that every year the Gloria Barron Prize for Young Heroes turns the spotlight on twenty-five remarkable young people: kids who have stepped out and done something truly heroic. The award honors these outstanding young people for making a significant positive difference to people and our planet. The top fifteen winners each receive $5,000 to support their service work or higher education.

It is my great pleasure to introduce the winners of the 2014 Gloria Barron Prize for Young Heroes:

Joshua, age 10, of California, who was born blind and has created a program to install Braille signage and audible scanners in six Whole Foods Markets across the country in order to help the blind grocery shop independently.

Casey, age 16, of North Carolina, who has worked for nine years as the founder of L.A.S.T. (Love A Sea Turtle), raising over $370,000 for sea turtle protection and educating thousands about the need to protect the planet.

Jonathan, age 18, of New York, who advocates for environmental and climate justice in his low-income community of color and organizes the annual New York City Climate Justice Youth Summit, a gathering of 750 young people.

Anna, age 12, of Connecticut, who created Warming Families Makes Cents, rallying her school and community to raise $10,000 to help heat the homes of struggling families in her community.

Kiran, age 16, of California, who created Waste No Food, a free web-based service that links food donors with charities that feed the hungry. He has redistributed food to serve 100,000 meals and has kept thousands of pounds of food out of landfills.

Michael, age 14, of Florida, a quadruple amputee who lost his limbs following an infection at age 8 and who has raised over $225,000 in the past year to help victims who suffered limb loss in the 2013 Boston Marathon bombings.

Abby, age 15, of Illinois, who gathered a record-breaking 175,000 signatures on Change.org to convince the governor of her state to veto a bill that would have prevented any town in Illinois from banning plastic bags.

Finn and Anna, age 18, of Vermont, who built a community root cellar in their hometown and created a Grow Some, Feed Many gardening initiative in order to store and deliver fresh local produce to their town’s food bank year-round.

Claire, age 17, of California, who lives with Cystic Fibrosis and has raised over $150,000 for her Claire’s Place Foundation to provide emotional and financial support to other families whose children have the disease.

Jasmine, age 18, of Illinois, who founded and publishes Love GIRLS Magazine, a free publication distributed to three thousand teenage girls each quarter that focuses on girls’ self-esteem and empowerment.

Rory and Maeve, ages 16 and 11, of Louisiana, who created Kids Love the Gulf in response to the BP oil spill. The siblings have raised $8,000 to help marine animals and have published an ABC book about the Gulf for children.

Carter, age 16, of California, who founded Students for Safe Water and has raised nearly $70,000 to bring safe drinking water and basic sanitation to thousands of people in developing countries.

Winter, age 15, of Oregon, who created Team Winter to use her gifts as a runner, triathlete, and skier to raise nearly $500,000 for prostate cancer research in honor of her dad, who lost his fight against the disease when Winter was nine years old.

Rachel, age 17, of Wisconsin, who founded Literacy for Little Ones to support families in reading to their babies. She and a team of 700 youth have created and distributed 8,400 packages containing a new book to parents of newborns in seven hospitals.

Stefan, age 18, of California, who has raised more than $120,000 in ten years to build three schools in Kenya that educate nearly 1,000 children. He has fundraised by writing and selling four nonfiction books for children.