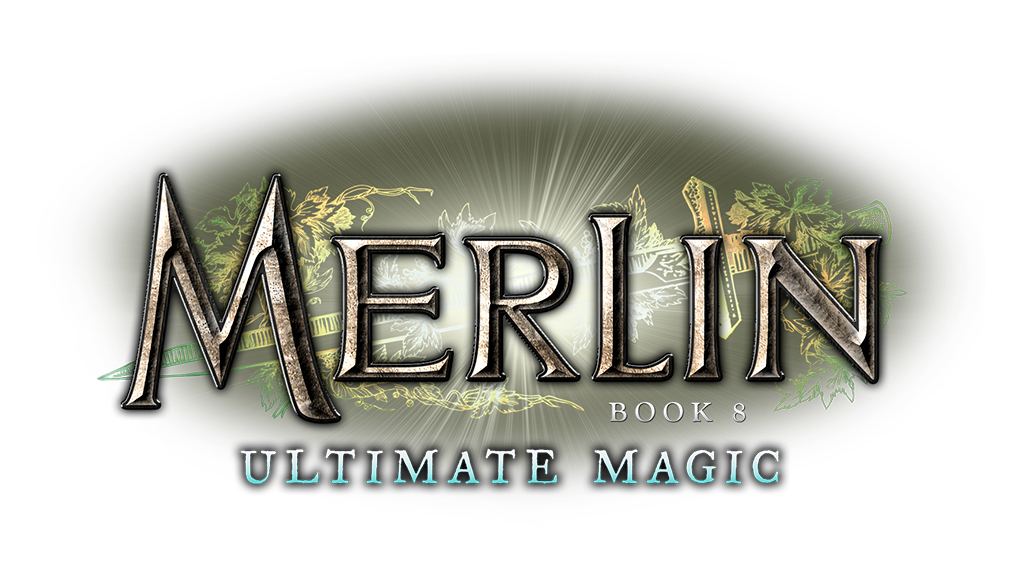 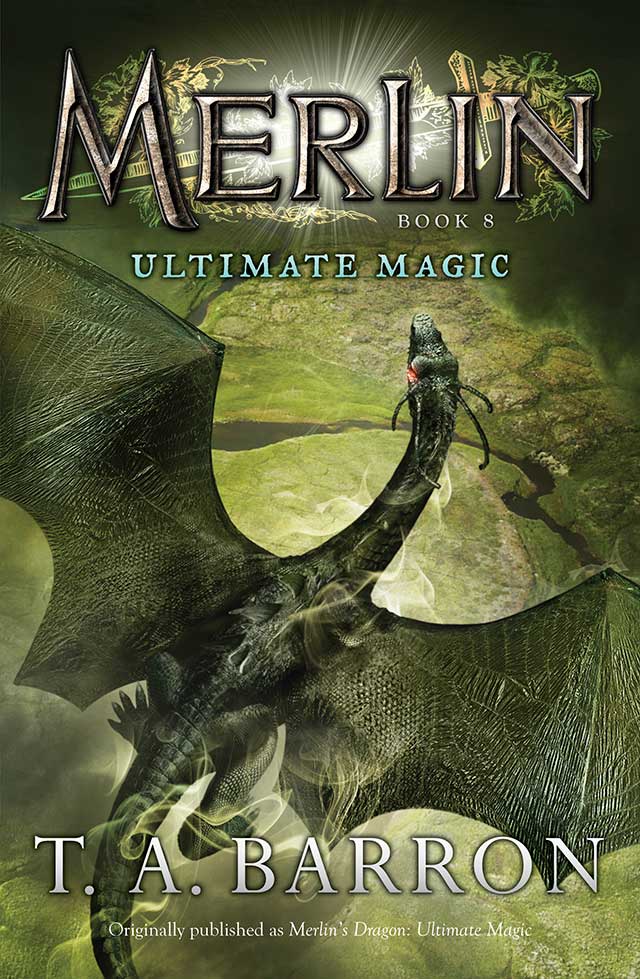 For a big surprise, I look for a small mystery.

Basilgarrad lifted his enormous head, scanning the rolling meadows that reached to the distant trees. His dragon’s eyes glittered as his powerful shoulder muscles tensed. Both of his furled wings — each one big enough to hold the entire body of a normal-sized dragon — shook with anticipation, their bony tips clattering against the scales of his back.

A breeze suddenly stirred, bending the blades of grass around him. To his own surprise, he caught some of his favorite scents. Dank woodland mushrooms. Cedar resins, both sharp and sweet. Tangy apples, so ready for eating they would almost peel themselves in a young elf’s hands. Enchanted spiderwebs, sturdy enough to hold a boulder. Fresh spray from the headwaters of the River Relentless.

For an instant, taking in those rich aromas, he remembered why he treasured this realm, this world of so much life. So much magic. And why, if necessary, he would die to protect it.

His gargantuan tail, ending with a massive club, slammed against the ground. Tremors shot in all directions, cracking open crevasses in the meadows and shaking the faraway trees. For he had smelled, just then, a very different scent.

The scent of battle.

Allies, from all across Avalon, marched swiftly toward him. Muscular centaurs, stamping their hooves, loped to his side. Close behind came men and women who carried rakes and staffs and swords, elves who bore great hunting bows, and dwarves who shouldered double-bladed axes. Plus many other creatures ranging from burly bears to tiny field mice who brought nothing but their brave hearts.

More allies, too, dotted the sky. Eagles swooped down from the heights, hawks with bright red tails glided nearer, and owls floated out of the trees. Soon the air reverberated with their screeches, hoots, and cries.

Yet Basilgarrad peered past them all. For he was watching a dark swarm of jagged-winged warriors that had just appeared over the horizon. Fast they flew, coming closer by the second. He knew them all too well: fire dragons — over a hundred of them.

His nostrils flared. He could smell, even at such a distance, their charred scales and bloodstained claws. And he knew that only he had any hope of stopping them.

The great green dragon shifted his gaze — and what he saw made him dig his claws into the turf. Flamelon warriors! An immense mass of those battle-hardened warriors, trained beneath the smoky volcanoes of Fireroot, started to stream onto the meadow. Armor glinting, they marched steadily nearer. With them came powerful catapults, great machines that could fling heavy stones and vats of boiling oil. They also brought one more contraption, a pyramid-shaped tower so large that it took more than fifty flamelons to drag it across the ground.

Staring at the huge tower, whose wheels creaked noisily, Basilgarrad released a low, wrathful growl. What in the name of Avalon is that thing? he asked himself. Whatever it is, I don’t like it. Not at all.

Although the mysterious tower made him feel uneasy, he quickly forgot about it, for his thoughts had turned to a far greater concern. The fate of his world, the Great Tree whose early days he had witnessed so long ago and whose many wonders he had seen over the centuries. Avalon was, as his friend Merlin once said, more than just a truly remarkable place. It was, in fact, an idea — that so many diverse creatures and realms could live together in peace, at least for a time.

That time, he knew, was now dead. But would Avalon itself die, as well? That depended on the outcome of this monumental clash. For this was going to be the first — and, most likely, the last — time all of Avalon’s foes and defenders would face each other in battle.

As he scanned the approaching fire dragons and the fearsome battalion of flamelon warriors, he growled deep in his throat. He knew that if he and his loyal allies failed on this day, no one would be left to protect their world. Their homes, their dreams, their families and friends — even his beloved Marnya — would all be lost.

His growl swelled into a rumble so loud that several centaurs reared up in surprise, their forelegs kicking at the air. We must win this battle today! His huge snout wrinkled. Not just to defeat this enemy, and not just to save our loved ones. But for another reason, as well.

“I must survive this day,” he vowed, his voice rumbling like thunder. “To find and kill that evil monster behind all this!”

He thumped his tail, shaking with rage and frustration. He didn’t know where to find that shadowy beast who had caused this war, promising priceless jewels to the dragons and unrivalled power to the flamelons. All he knew was that its secret lair was somewhere in Avalon — and that it served the wicked warlord of the spirit realm, Rhita Gawr. If only he knew where to look, he could destroy the beast and finally bring this horror to an end. And unless he did that, the threat to Avalon would only grow worse.

Grinding his rows of jagged teeth, he added in a somber tone, “The truth is, even if I do prevail today, there is no way to find that monster. No way at all.”

Basilgarrad cocked his head and saw, peering up at him, Tressimir, the young historian of the wood elves. “What do you mean?” demanded the dragon. “Speak quickly!”

Tressimir reached into his weathered leather satchel and pulled out a folded piece of parchment. “This is a map. A magical map, from Krystallus. He wanted you to have it — to help you save Avalon.”

Basilgarrad watched, glancing anxiously at the approaching enemies, as Tressimir unfolded the parchment. “This map can tell you where to find anything at all. Just concentrate on what you want to find. But first I must warn you.”

“This map,” declared the elf, “can be used only once. So whatever you want to find, you must be absolutely sure.”

“Then concentrate your thoughts.”

Filling his mind with the shadowy beast, as well as the terrors it had brought to Avalon, Basilgarrad stared at the parchment. Nothing happened. He thought harder, his whole enormous body trembling with exertion. Still nothing.

Dismayed, he glanced at the swarm of fire dragons advancing across the sky. And at the army of flamelons, dragging their mysterious tower. Then, one last time, he looked at the parchment, silently cursing himself for being foolish enough to let is raise his hopes.

It was changing! The map’s edges darkened to a rich golden hue, as tan-colored clouds started to swirl across its face. He spotted, in one corner, a decorative compass, whose arrow suddenly began to spin faster and faster. Meanwhile, the clouds coalesced into shapes. Recognizable shapes.

Avalon! All the root-realms appeared, then six out of seven vanished as the map focused on just one — Mudroot. Veering northward, the image moved all the way to the farthest reaches of the realm, revealing the dark, shifting outlines of a swamp. And deep within that swamp … an eerie red glow.

He rustled his gargantuan wings. “First, though, I have a battle to fight.”

Just as Basilgarrad started to open his wings, Tressimir cried out in surprise. The map began to smoke, sizzling between his fingers. He dropped it, and at that instant, it burst into flames. Seconds later, nothing remained but ashes — and one tiny scrap that drifted slowly to the ground.

Deftly, Basilgarrad clasped the ragged bit of paper between the tips of two claws. The scrap, still smoking, looked more like a flake of charcoal than anything valuable. Let alone magical. Only a barely noticeable mark on its unburned edge, the golden arrow from the decorative compass, gave any hint of its remarkable origin.

On an impulse, he tucked the smoldering scrap into the gap above an iridescent green scale on his shoulder. Why, he couldn’t explain. He only knew that he didn’t want to part with it. At least not yet.

Then, opening his wide wings, he released a thunderous roar that filled the sky. All who heard it knew, beyond doubt, that the great battle for Avalon had begun.

Hope is sometimes fleeting, but always precious. Sad to say, when that battle began, most of my companions had no hope at all.

With a mighty roar that shook trees many leagues away, the most powerful dragon in the history of Avalon leaped into the sky.

But even as his enormous green wings opened wide and started to beat, slapping the air forcefully as they carried him higher, Basilgarrad glanced down at the spot where the ashes from the magical map were still drifting down to the grass. Silently, he repeated his vow: I will find you. Whatever it takes, I will go to the Haunted Marsh — and find you.

“But first,” he said aloud, peering at the army of fire dragons flying swiftly toward him, “I have a small task to perform.”

Eyes alight, he roared once again — the roar of a dragon plunging into battle.