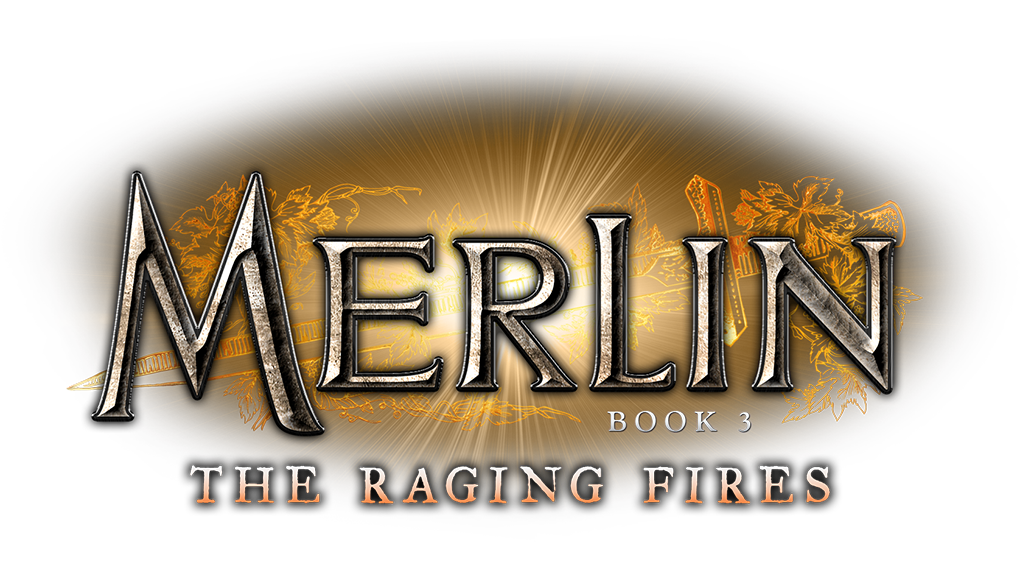 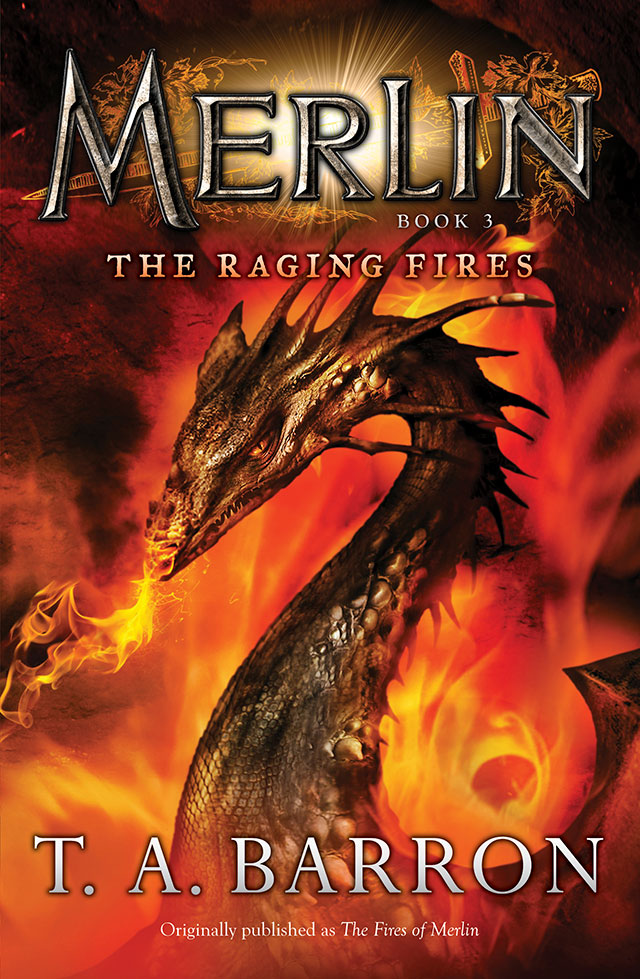 The mists of memory gather, the more with each passing year. Yet one day remains as clear in my mind as this morning’s sunrise, although it happened those many centuries ago.

It was a day darkened by mists of its own, and by smoke thick and wrathful. While the fate of all Fincayra hung in the balance, no mortal creature suspected. For the mists of that day obscured everything but the fear, and the pain, and only the slightest hint of hope.

As still as a mountain for years beyond count, the massive gray boulder quite suddenly stirred.

It was not the fast-flowing water of the River Unceasing, slapping against the base of the boulder, that caused the change. Nor was it the sleek otter whose favorite pastime had long been sliding down the cleft between the boulder and the river’s muddy bank. Nor the family of speckled lizards who had lived for generations in the patch of moss on the boulder’s north side.

No, the stirring of the boulder on that day came from an entirely different source. One that, unlike the lizards, had never been seen at the spot, although it had in fact been present long before the first lizard ever arrived. For the source of the stirring came from deep within the boulder itself.

As mist gathered within the banks of the river, resting on the water like a thick white cloak, a faint scraping sound filled the air. A moment later, the boulder wobbled every so slightly. With shreds of mist curling about its base, it suddenly pitched to one side. Hissing with alarm, three lizards leaped off and scurried away.

If the lizards had hoped to find a new home in the moss atop one of the other boulders, they were destined to be disappointed. For more scraping sounds joined with the constant splashing of the current. One by one, each of the nine boulders lining the river began to wobble, then rock vigorously, as if shaken by a tremor that only they could feel. One of them, partly submerged by the rushing river, started rolling toward a grove of hemlocks on the bank.

Near the top of the first boulder to come to life, a tiny crack appeared. Another crack split off, and then another. All at once, a jagged chip broke away, leaving a hole that glowed with a strange orange light. Slowly, tentatively, something started pushing its way out of the hole. It glistened darkly, even as it scraped against the surface.

It was a claw.

Far to the north, in the desolate ridges of the Lost Lands, a trail of smoke rose skyward, curling like a venomous snake. Nothing else moved on these slopes, not even an insect or a blade of grass trembling in the wind. These lands had been scorched by fire — so powerful that it had obliterated trees, evaporated rivers, and demolished even rocks, leaving behind nothing but charred ridges coated with ash. For these lands had long been the lair of a dragon.

Ages before, at the height of his wrath, the dragon had incinerated whole forests and swallowed entire villages. Valdearg — whose name, in Fincayra’s oldest tongue, meant Wings of Fire — was the last and most feared of a long line of emperor dragons. Much of Fincayra had been blackened by his fiery breath, and all its inhabitants lived in terror of his shadow. Finally, the powerful wizard Tuatha had managed to drive the dragon back to his lair. After a prolonged battle, Valdearg had at last succumbed to the wizard’s enchantment of sleep. He had remained in his flame-seared hollow, slumbering fitfully, ever since.

While many Fincayrans grumbled that Tuatha should have killed the dragon when he had the chance, others argued that the wizard must have spared him for a reason—though what that reason could possibly be no one knew. At least, in slumber, Wings of Fire could cause no more harm. Time passed, so much time that many people began to doubt that he would ever wake again. Some even questioned the old stories of his rampages. Others went further, wondering whether he had ever really existed, although very few indeed were willing to travel all the way to the Lost Lands to find out. Of those who did set out on the dangerous trek, very few ever returned.

Very little of what Tuatha had said at the conclusion of the Battle of Bright Flames had been understandable, for he spoke in riddles. And many of his words had been long forgotten. Still, a few bards kept alive what remained in the form of a poem called The Dragon’s Eye. Although the poem had many versions, each as obscure as the others, all agreed that on some dark day in the future, Valdearg would awaken once more.

Even now, these lands reeked of charcoal. Near the hollow, the air shimmered with the unremitting heat of the dragon’s breath. The low, roaring sound of his snoring echoed across the blackened ridges, while the dark column of smoke continued to pour from his nostrils, lifting slowly skyward.

The claw pushed higher, tapping the edge of the rock-like shell as cautiously as someone about to step on a frozen pond would tap the ice. Finally, the dagger-sharp tip of the claw dug into the surface, shooting cracks in all directions. A muffled sound, part screech and part grunt, came from deep inside. Then, all at once, the claw ripped away a large section of the shell.

The enormous egg rocked again, rolling farther down the riverbank. As it splashed in the surging water, several more pieces of the shell dropped away. Although the morning sun had started to burn through the mist, its light did not diminish the orange glow radiating from the gaping hole.

More cracks snaked around the sides. The claw, curved like a huge hook, slashed at the edges of the hole, spraying fragments of shell in the river and on the muddy bank. With another grunt, the creature inside shoved the claw completely out of the hole, revealing a twisted, gnarly arm covered with iridescent purple scales. Next came a hunched, bony shoulder, dripping with lavender-colored ooze. Hanging limp from the shoulder was a crumpled fold of leathery skin that might have been a wing.

Then, for whatever reason, the arm and shoulder fell still. For a long moment the egg neither rocked nor emitted any sound.

Suddenly the entire top half of the egg flew off, landing with a splash in the shallows. Rays of orange light shot into the shredding mist. Awkwardly, hesitantly, the scaly shoulder lifted, supporting a thin, purple neck flecked with scarlet spots. Hanging heavily from the neck, a head — twice as big as that of a full-grown horse — slowly lifted into the air. Above the massive jaw, studded with row upon row of gleaming teeth, a pair of immense nostrils twitched, sniffing the air for the first time.

From the creature’s two triangular eyes, the orange light poured like glowing lava. The eyes, blinking every few seconds, gazed through the mist at the other eggs that had also begun to crack open. Raising one of her claws, the creature tried to scratch the bright yellow bump that protruded from the middle of her forehead. But her aim was off and instead she poked the soft, crinkled skin of her nose.

With a loud whimper, she shook her head vigorously, flapping her blue, banner-like ears against her head. After the shaking ceased, however, her right ear refused to lie flat again. Unlike the left one, which hung almost down to her shoulder, it stretched out to the side like a misplaced horn. Only the gentle droop at the tip hinted that it was, in fact, an ear.

Deep within the smoking cavern, the gargantuan form shifted uneasily. Valdearg’s head, nearly as broad as a hill, jerked suddenly, crushing a pile of skulls long ago blackened by flames. His breath came faster and faster, roaring like a thousand waterfalls. Although his enormous eyes remained closed, his claws slashed ruthlessly at some invisible foe.

The dragon’s tail lashed out, smashing against the charred wall of stone. He growled, less at the rocks that tumbled onto the green and orange scales of his back than at the torments of his dream—a dream that pushed him to the very edge of awakening. One of his vast wings batted the air. As the wing’s edge scraped the floor of the hollow, dozens of jeweled swords and harnesses, gilded harps and trumpets, and polished gems and pearls flew in every direction. Clouds of smoke darkened the day.

The creature in the egg, her nose still throbbing, flashed her eyes angrily. Feeling an ancient urge, she drew a deep breath of air, puffing out her purple chest. With a sudden snort, she exhaled, flaring her nostrils. But no flames came, nor even a thin trail of smoke. For although she was, indeed, a baby dragon, she could not yet breathe fire.

Crestfallen, the baby dragon whimpered again. She lifted one leg to climb the rest of the way out of the shell, then halted abruptly. Hearing something, she cocked her head to one side. With one ear dangling like a thin blue flag and the other soaring skyward, she listened intently, not daring to move.

Suddenly the hatchling drew back in fright, teetering in the remains of the egg. For she had only just noticed the dark shadow forming in the mist on the far bank of the river. Sensing danger, she huddled deeper in the shell. Yet she could not keep her one unruly ear from poking over the rim.

After a long moment, she raised her head ever so slightly. Her heart thumped within her chest. She watched the shadow draw slowly nearer, wading through the churning water. As it approached, it started to harden into a strange, two-legged figure — carrying a curved blade that gleamed ominously. Then, with a start, she realized that the blade was lifting to strike.