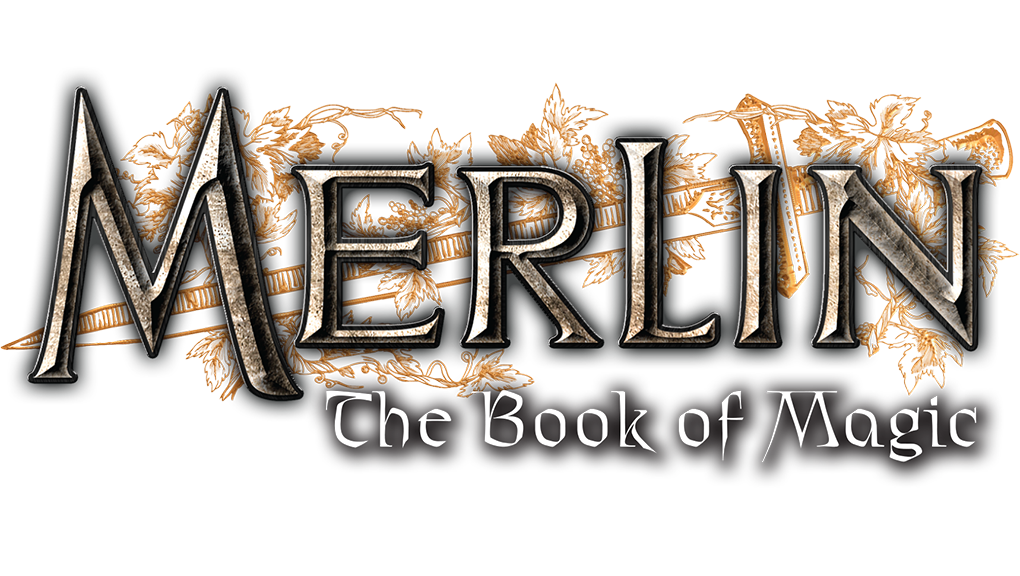 THE BOOK OF MAGIC EXCERPT 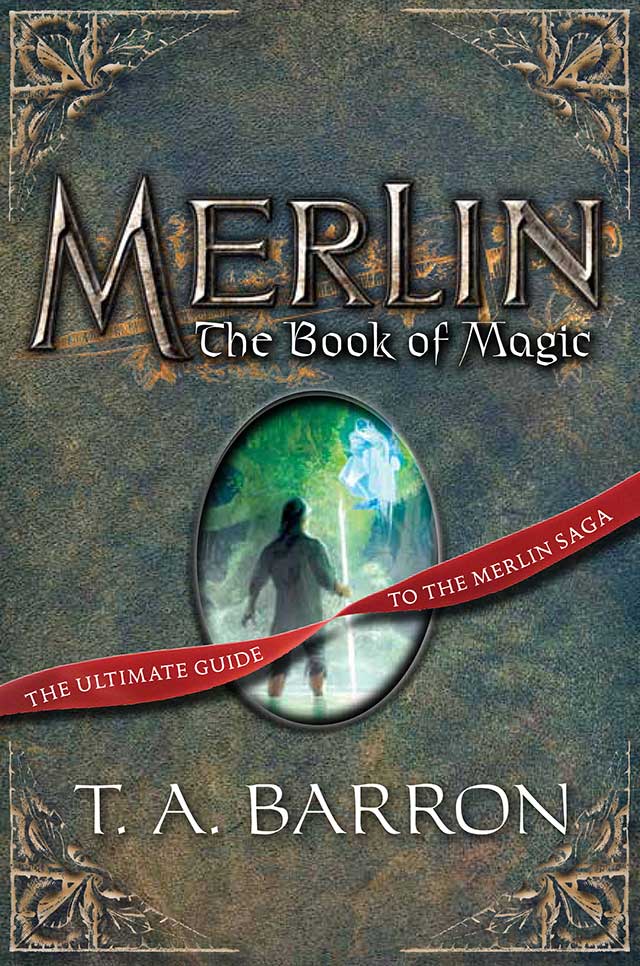 Warning to the Reader

Pray, take care with this book! You see, it contains the secret journal of the great wizard Merlin. Over the centuries, others contributed their share — while still others sought to capture Merlin’s magic for themselves. Recently, these papers have come to me … by strange, magical, and (I must confess) nefarious means.

And now, the secret journal of Merlin has come to you. But I must warn you: These pages hold more than knowledge. They hold danger. Sometimes subtle, often surprising, the secrets they contain have taken many centuries, and more than a few lives, to assemble. If these secrets fell into the wrong hands … the enemies of magic could use them to destroy, not create. So guard this book with the valor of a wizard!

Just how did these papers come to me, and now to you? I shall reveal that only in summary form — to protect the valiant souls who helped me along the way … and to torment the ones who did not. (Yes, I know who you are.)

From the hand of Merlin…

Merlin himself gave birth to this book by crafting a simple, leather-bound journal that he closed with a magical clasp. All through the Lost Years of his youth, he wrote in the journal, hiding it deep in the folds of his tunic.

Beginning soon after he had washed ashore from the raging sea, Merlin’s earliest entries speak with the voice of a young man who is very far from a great wizard. He is nameless, homeless, and powerless — rife with pain that makes those original entries difficult to read. (And it doesn’t help that his handwriting is truly terrible.)

In time, he discovered the magic within him—and added new pages as that magic grew to astonishing levels. The journal expanded as young Merlin learned the secrets of the mist-shrouded isle of Fincayra, as well as the dark truths of his childhood. And it thickened more as he healed a wounded dragon, fell in love, battled creatures who could devour magic, ran with the deer, witnessed the Dance of the Giants, traveled through time to meet his elder self, mastered the Seven Songs, took his sister’s spirit into himself, and — at last — learned to see in an entirely new way, a way befitting a wizard.

When Merlin finally left for Earth, hoping to inspire a new realm called Camelot, he tucked the journal into the innermost pocket of his blue cloak. But when he returned to Avalon to marry Hallia, he entrusted the journal to his sister, Rhiannon, soon to become High Priestess. Rhia added several fascinating entries of her own, which range from the first detailed description of light flyers to her horrible premonition that led to the Dark Prophecy. Ultimately, before she vanished mysteriously in the Year of Avalon 413, Rhia hid the journal in a knothole of the ancient oak tree Arbassa in Lost Fincayra.

Eventually, Merlin and Hallia’s only child, Krystallus Eopia, overcame his lack of magic to become Avalon’s most famous explorer. On one harrowing journey to Lost Fincayra, he found the journal — now so old that wrinkles creased its leather cover like the face of an old friend. He slipped the journal into his tunic pocket and carried it everywhere. As the first person after Serella, the elf queen, to master the dangerous art of portalseeking, he discovered many wondrous places. Throughout his adventures, Krystallus noted unusual facts — whether bizarre, beautiful, mysterious, or terrifying.

Whenever he visited the Eopia College of Mapmakers, Krystallus added more notes (as well as maps and drawings) to the journal, increasing its size dramatically. He also tried his best to decipher the chicken scratches of his father’s writing. (I have often imagined him in the college library, seated beneath the great stained-glass window that had been melted by fire dragons into the shape of a star within a circle, cursing at Merlin’s impossible scrawl.) As a result, Krystallus completed the most extensive portrait ever made of Merlin’s magical realms.

For many years, Krystallus guarded the journal with the ferocity of a warrior. Not even Babd Catha, the Ogres’ Bane, could have pried it away. Finally, he decided to take it with him as he embarked on his most ambitious journey of all — to find the secret pathway to the stars. Suspecting that he might never return, he hid the journal in a remote place: the Hall of the Heartwood, deep within the trunk of the Great Tree.

It was there that Tamwyn, the son Krystallus never knew, discovered the secret journal. Buried in a box, along with a handwritten scroll, these writings seemed to speak right into Tamwyn’s mind. His father’s entries rang with the man’s rumbling voice and thoughtful cadence. As much as Krystallus had prized these papers, this young lad — Merlin’s true heir — treasured them even more.

In the tumultuous days that followed, Tamwyn added many notes of his own to the journal. Unfortunately, his hastily scrawled entries are almost as difficult to read as Merlin’s. Worse yet, the pages were badly battered, sometimes beyond recognition, during the lad’s far-flung travels. Like the pack that carried it, the journal was gnawed by sharp teeth, drenched by Tamwyn’s ride on an upward-flowing waterfall, crushed by the claws of the mighty dragon Basilgarrad, and singed by the flames of fire angels during the final battle for Avalon in the stars..

All these factors made reviving this journal a daunting task. When I found it — hidden inside a crystal cave whose location came to me in a dream — it was a tattered pile of shredded leather and crumpled pages. The entries were a complete mess and spanned four separate worlds. But as much as that task challenged me, it also thrilled me. For I knew how far these pages had traveled — from the ancient shores of Fincayra, through the seven root-realms of Avalon, up the uncharted paths of the Great Tree, across the River of Time, and ultimately … to the stars.

And now to you.

Along the way, these pages have gained many stains, marks, and tatters, along with a mysterious magic of their own. And so they now come — from the hands of Merlin, Rhia, Krystallus, Tamwyn, and others — to you.

P.S. If you would like to learn more about these matters, information is scarce. But you could, I suppose, check these highly unreliable sources: The Lost Years of Merlin, a five-book epic; Merlin’s Dragon, a trilogy; and The Great Tree of Avalon, a trilogy.

Deep in Druma Wood grew a great oak tree whose branches reached so high they brushed the clouds. This was Arbassa — a tree so magical that it became the home as well as the guardian of a very special child: young Rhia. Many years later, in memory of this tree and its marvelous forest, Rhia’s mother, Elen, chose the name Drumadians for the members of the Society of the Whole. And for similar reasons, the mysterious Lady of the Lake dubbed her home New Arbassa.

When young Rhia first showed Arbassa to the boy who would become Merlin, at the start of his Lost Years, he described it this way:

From the center of the clearing rose a great oak, mightier than any tree I had ever seen. Its burly branches reached upward from the trunk, so thick that it seemed to be made of several trunks fused together. Set in the midst of those branches, glowing like a giant torch, was an aerial cottage whose beams and walls and windows curled with the twisting limbs. Layers of leaves overlaid the tree house, so that the light radiating from its windows shone through multiple curtains of green. Here, at last, was Arbassa.

Rhia lifted her arms in greeting. In response, the branches of the tree shimmered just enough to drop a light rain of dew on her upturned face.

There was a sudden rush of air and the sweet scent of cinnamon when Merlin uncorked an ancient flask. For he’d just rescued one of Fincayra‘s most remarkable creatures: Aylah, a wishlahaylagon — also known as a wind sister. Trapped inside the flask by the hag Domnu, Aylah would surely have died if the young wizard hadn’t saved her. As she told him, “I must move as freely as the air itself, Emrys Merlin. For I am made to travel fast and far, never sleeping, never stopping.” Whenever she spoke, a warm breeze swept slowly around Merlin, fluttering his tunic, embracing him with wind that carried the scent of cinnamon. Many times during his quest of the Seven Songs and his search for the lost wings, Aylah appeared and lightly caressed his cheek. Once she even carried him, along with Rhia and the jester Bumbelwy, all the way across Fincayra to find the spirit of a star, Gwri of the Golden Hair. Years later, she reappeared, at the request of Dagda, to take an eventful journey with the tiny creature who would become the great dragon Basilgarrad. Yet Aylah never stayed long. For she was always as restless as the wind.

“The oddest-looking creature I ever saw” was how Merlin described the clawed seal called the Ballymag. Somehow able to survive in Fincayra‘s deadly Haunted Marsh, he always enjoyed a mud bath (a “scrubamuck”), especially when the mud was thick and dark (“so very mooshlovely”). The pinnacle sprite Nuic recalls seeing him at Merlin’s wedding to Hallia atop the highest peak in the Seven Realms in the Year of Avalon 27. But few people know that when the Ballymag first met Merlin, he feared that the young wizard would try to have him “cookpotted and swalloweaten.”

A jester who can’t make anyone laugh? Meet Bumbelwy. When Merlin first saw him at Fincayra‘s Town of Bards, the jester was earnestly trying to be funny. But his hands drooped, his shoulders sagged, and his back stooped. Meanwhile, his entire face down to his chin seemed to frown. Even the bells on his droopy, wide-brimmed hat sounded like a funeral dirge. Yet he called himself Bumbelwy the Mirthful—perhaps because, as the bard Cairpré put it, “bread yearns to rise beyond its size.”

To Merlin’s great annoyance, Bumbelwy joined him on the quest of the Seven Songs. The young wizard did everything he could to lose him, but without success. At last, when Merlin was about to be devoured by the dragon Valdearg, Bumbelwy sang what he thought was a sorrowful lament, expressing his deep sadness. But unexpectedly, his song made the dragon laugh — allowing Merlin to escape. Ever after, when Merlin himself wanted to laugh, he only needed to recall Bumbelwy’s song:

A dragon savors all he eats

But values best the living treats

Who squirm and squeal before they die,

The filling of a dragon’s pie.

The dragon loves the crunch of bones

And all the dying cries and groans

Of people gone without a trace,

My friend, in dragon’s mouth interred,

Was even robbed his final word.

For down he went into that hole,

“The people’s bard” he was called — a poet who understood both the light and dark sides of mortal creatures. As Elen‘s tutor, he introduced her to the Greek myths; as her lover, he brought her the deepest happiness of her life. Later, as Merlin‘s mentor, he taught magic and lore — and also helped the young man build his first musical instrument, the time-honored tradition of someone who hoped to become a wizard. Cairpré died too soon, in Fincayra‘s final battle, his person just as beloved as his poetry. Like his most famous lines, he is remembered wholeheartedly, with both sweetness and sorrow.