Kate’s Enduring Gift and the Importance of Strong Female Characters

EDITOR’S NOTE: T. A. Barron joins us to talk about the special edition of The Ancient One and the lasting influence of the main character Kate. 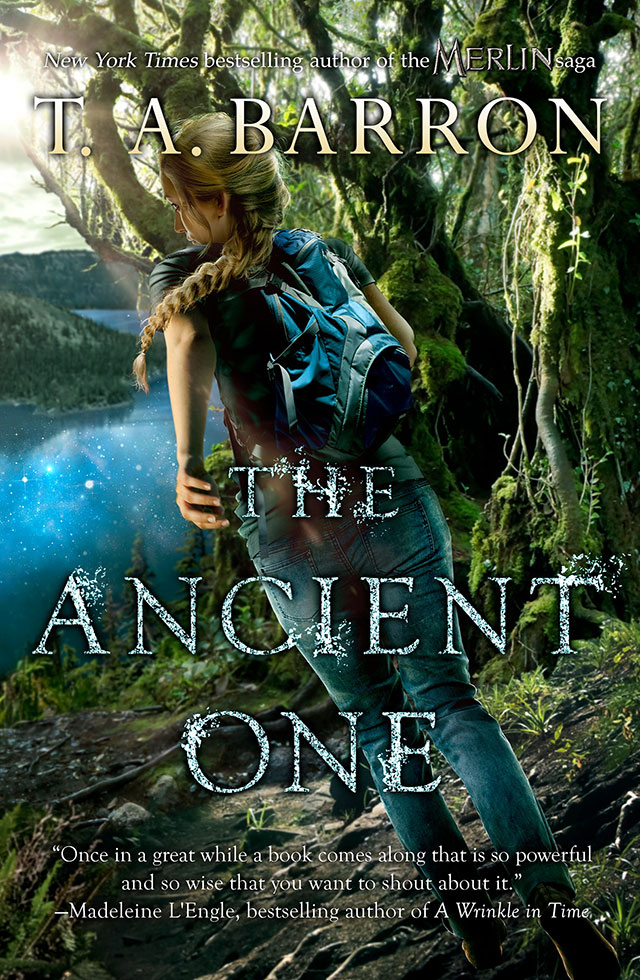 When Kate travels to Blade, Oregon, for a quiet week at Aunt Melanie’s cottage, her plans are dashed by the discovery of a grove of giant redwood trees in nearby Lost Crater. For thousands of years, no humans have entered the fog-filled crater–except possibly the Halami people, who lived in the region centuries ago before vanishing without a trace. Long a source of deep mystery, the crater is now a source of conflict, pitting those who see it as the dying mill town’s last hope against those who see it as a rare sanctuary that should be protected.

In this extraordinary quest, a girl discovers that all living things are connected in ways she never expected, and that true friendship can reach across cultures, and even across centuries.

This month a special edition of my book The Ancient One was released, featuring a beautiful new cover and an updated introduction. This exciting novel is one of the Adventures of Kate — stories that follow a teenage girl through all corners of the universe. I’m thrilled to introduce a new generation of readers to Kate, especially through the story of The Ancient One, in which she unexpectedly travels deep into the past in a struggle to save an ancient redwood forest.

When The Ancient One was first written 25 years ago, female characters in fantasy adventures were far more likely to be sidekicks and love interests rather than heroes of their own stories. Strong, intelligent, and courageous young women like Rey, Hermione, and Katniss had yet to find their way into fantasy novels, not to mention mainstream epic tales.

The credit for Kate being female really goes to our first child, my daughter Denali. When she was born, I had just left my day job to find out if I could write a story worth reading. I was working hard on the first book in the Adventures of Kate series, Heartlight. At the time of the book’s inception, I didn’t know whether the lead character would be a boy or a girl. But as the story progressed, I realized that its core idea was that everyone — even a lone youngster — has the power to make choices that could change the whole world. It was an idea that I hoped our infant daughter would someday understand. So I decided to make the protagonist a girl.

Then came the hard part: To make Kate an authentic character, I had to find the voice of the young woman within myself — not easy for a man in his late 30s. Of course, all of us have an infinite variety of voices inside ourselves, but any writer will tell you that it can be very difficult to hear the true voices of characters, and to respect them.

I’m pleased to say that the hard work was more than worth it. Kate’s adventures — in a distant galaxy, with an ancient Native American tribe, and deep under the sea — became fan favorites. I get hundreds of letters, emails, and art every year from readers who encounter her stories and identify with this smart, brave, and vulnerable girl. Some of these letters now come from adults who met Kate as a child and who, today, are sharing her adventures with their own children — girls and boys alike.

Since writing the tales of Kate’s heroism all those years ago, I’ve continued to include strong female characters in all my books. Merlin’s journeys throughout The Merlin Saga would have come to an end hundreds of times if he hadn’t benefited from the wisdom, courage, and tenacity of Rhia and Hallia, not to mention the lasting influence of his mother Elen. And let’s not forget the powerful enchantress Domnu, whose name means Dark Fate. The climax of Merlin’s passage to wizardry is when he takes his sister’s spirit into himself…and even after her spirit is returned to her body, some of her feminine wisdom remains with Merlin forever.

Further along in The Merlin Saga, the fate of entire world of the Great Tree of Avalon relies heavily on the heroism, courage, and wisdom of the young priestess Ellie, the elf warrior Brionna, and many other women. In my latest series, The Atlantis Saga, the creation of the magical island in Atlantis Rising was triggered by the young woman Atlanta as much as her companion Promi.

Female characters are also essential to my chapter book Tree Girl, where young Rowanna must face her deepest fears to find the secret of her true identity. Women play major roles in all my picture books, as well. And of course, young women inspired many of the nonfiction stories that readers enjoy in The Hero’s Trail.

As a writer, the decision to write a strong female character is only the first (and easiest) step. The greater challenge is to make that character feel wholly true. That takes lots of soul searching, honest listening, and rewrites. But the rewards for doing so are immense. I learned that in discovering how to hear Kate’s voice more than two decades ago… and that discovery has helped me greatly as a writer.

Now, many years later, I’m very pleased to know that Kate’s starring role as the hero of her own story was not just an anomaly. Perhaps, in her own surprising way, Kate was a precursor to the many heroic women who can be found in fantasy adventure tales today.