Articles, In the Media, On Writing, The Merlin Saga 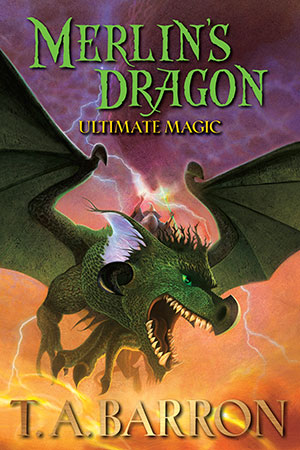 Barron is at the end of a journey. Today, the final edition his Merlin’s Dragon trilogy wraps up Barron’s 11-book adventure series.

DiTerlizzi — coauthor of The Spiderwick Chronicles — in September launched The Search for WondLa, the first book in his trilogy about a 12-year-old girl who flees her underground home to search for other humans.

Merlin and WondLa have caught the attention of producers, and movies are in the planning stages.

The authors will be at free events in Houston next week to talk about imagination, dragons and robots.

Their books about heroic young people are geared for a demographic that both authors love to talk with about life’s possibilities and then hook as lifetime readers.

Merlin’s Dragon: Ultimate Magic is the culmination of 18 years of work, Barron said. In 1996, the first title in the five-book series — The Lost Years of Merlin— was published. Then came the The Great Tree of Avalon trilogy, followed by the Merlin’s Dragon trilogy. A compendium, The Book of Merlin, is finished and due for publication in 2011.

“It’s one complete world. That’s the most fun part for me. It’s got all these magical places and wondrous creatures and more than 250 characters and all these back stories and histories and complicated relationships,” Barron said.

In Ultimate Magic, Merlin’s sidekick Basil, the little fellow who becomes the greatest dragon of all time, leads the fight to save the people of Avalon.

In DiTerlizzi’s The Search for WondLa the heroine Eva (DiTerlizzi pronounces “EV-a”) is styled as modern-day Alice Liddell of Alice’s Adventures in Wonderland, Wendy Darling of Peter Pan and Dorothy of The Wizard of Oz. There are also some Star Wars influences, he said.

Twelve-year-old Eva Nine has lived isolated underground with mechanical caretakers when an invasion forces her above ground to fend for herself in a scary landscape on her quest to find a new home. Drawings open WondLa’s 42 chapters. An augmented reality element allows the reader to put designated illustrations up to a computer’s webcam to follow Eva’s journey on an interactive map.

While the authors have much in common, their work is quite different, and they have different approaches.

Here is what they said when asked how they create their mystical characters:

“I always start with visualizing it. What does this creature or being or person look like? And then I go through all the five senses: What do they sound like, smell like, feel like, all of that.

“And then I ask a second level of questions. Which is what is their daily life like? What would this creature do on a typical Tuesday? Does it live in a cave? Does it live in the air? Does it have a nest of babies? Is it an outcast from its society or the ruler of its people or … a scribe who writes the history of its people?

“And I also want to know a secret. Something down deep.

“So at the very, very end at the bottomless bottom of level three I ask: What is your deepest, darkest secret? And when the creature answers me with their own voice, I know I now know them well enough to make them come alive for my readers.”

“I keep journals and sketchbooks.

“And that’s grown since I was a very young kid, and I would always sit in the back of the classroom and draw. And it was never just a drawing. It was always a scene or story that went with the drawing that I could explain everything that was going on.

“So if something flickers through my head and I have the wherewithal, I will jot it down. Or sometimes I dream this stuff, and I will put it down.

“At that point, those early, early stages, I don’t really know a whole lot.

“ForWondLa, I just kept doing these drawings of this girl. All I knew she was alone on an alien planet. I didn’t know who she was. I didn’t know what her mission or her story was going to be.

“I simply kept drawing this girl over and over again. As time went on I started drawing some of the secondary characters. And from there your imagination starts to fill in.

“I’ll do very preliminary sketches of them. They may have general characteristics as to what the final version looks like, but you don’t know them. You have to figure out the story.