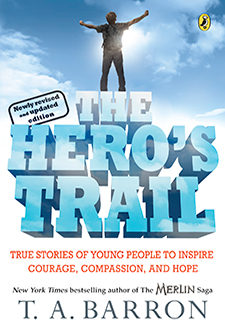 Jamie Lee: There are so many motivational “gurus” and personal coaches out there today, each one promising to turn lives around through productivity, goal-setting, and “inspired action.” What truth have you discovered about living your dream? What did you need to turn that dream into a reality?

T. A. Barron: Gosh, I’m so glad you are asking only such easy, puffball questions!

Mainly, all I know is that I still have a lot more to learn. But I do know this much: The first key to making your dreams come true is to know those dreams clearly. That means looking inside – asking yourself what you truly love – rather than looking outside, and responding to whatever expectations or marketing opportunities you may find. Dreams come from inside, not outside. They must be owned at the level of your soul.

Then comes the second key: Perseverance. Once you know your dreams, never stop pursuing them, no matter what obstacles the world throws at you. This is your life, your soul, your dreams – the most precious things you have. So it’s worth fighting to keep them wholly alive! If you stay true to them, with a bit of luck, you will succeed. And you’ll have a marvelous journey along the way.

JL: You’ve said that one of the two themes which run through all your work is that there is a hero in every person – a capability to do something special and remarkable. How do you think parents can help their kids find and own their inner hero?

TAB: We can do a lot as adults to foster that ethic in young people. Here are some ideas:

1. Talk to your children (or read books with them) about heroes, both historical (i.e. Anne Frank, Gandhi, Abraham Lincoln, Harriet Tubman), fictional (the heroes from some of their favorite books), and “real-life” (such as the young people I wrote about in The Hero’s Trail or the dozens who have won the Prize). I have found, both in speaking with thousands of students each year and with my own five children, that there is nothing more powerful than stories of real young people who are making the world a better place. No need to preach; just point to role models.

2. Talk about heroic qualities – things like courage, commitment, compassion. Brainstorm what it takes deep inside oneself to “make a difference.”

3. Engage your children in some sort of volunteer work. Perhaps start with what they are already passionate about – be it animals or art or athletics – and help them brainstorm ways they might use their talents and interests to benefit others. We have found that many, many kids – and the most inspiring of our Barron Prize winners – find their service work emerging in this authentic, enjoyable, and very personal way.

4. Lead by example. Make positive choices in your own life. Pursue a passion that also helps out others in some way. Even the smallest good deeds matter.

JL: Have you ever talked to kids or parents about the differences between real heroes and pseudo-heroes (who may be full of flash and hype, but don’t really have a hero’s heart)? How do you define the difference and how can a parent teach a child to be the former instead of the latter?

TAB: Every young person is a force – a package of positive energy that could help the world in some way. They may not believe that. They may think it’s the craziest idea ever. But it’s true. Deeply true.

How do young people make that discovery? Not by giving them lectures or sermons. And certainly not by giving them endless amounts of time with the mass media, who perpetuate our society’s deep confusion between what is a hero – and what is a celebrity. No, the very best way is by sharing examples – stories about young people who faced difficult challenges and somehow triumphed. Nothing is more powerful than stories of heroic people, whether they are fiction or nonfiction.

Then kids are ready to talk about the difference between heroes and celebrities. They quickly grasp that celebrities are all about fame and fortune, even if those people are really superficial and not truly admirable. Heroes, by contrast, are all about character – the qualities you can’t see on the surface, but which are revealed by actions. Qualities like courage, perseverance, hope, and compassion. Those are the qualities of heroes – shown every day by a caring parent or a devoted teacher or a good friend – and those qualities hold our world together.

JL: I’ve read that you write your manuscripts in longhand with a blue felt tip pen. Is that also how you outline your stories? Can you share a little bit about your planning/research process?

TAB: Writing is a strange, mysterious process. After more than twenty years, I still don’t know how it really works. But I do know it requires a special, personal chemistry. So I always write the first draft with a blue felt pen and a pad of paper, because that’s a good chemistry for me. Probably because, as a kid growing up in Colorado, that’s how I started writing. I also do a lot of background research – about Celtic lore, Native American dances, sunken treasure ships … whatever is needed to make the story authentic. Once the manuscript is ready – a good first draft but still far from finished – I transfer it to a computer. Then I do six or seven complete rewrites – as many as it takes to get it right. Last of all, I do some careful, delicate editing – marking up the printed copy with my friendly blue pen.

Why use an outline? Normally I need some sort of aerial photograph of the terrain of a quest. So I know the approximate beginning, ending, and the dangerous marshes or inspiring peaks in between. In this way, the outline becomes a kind of trail map. Then I intentionally lose the map, so I can find out what the terrain is like on the ground. I wander, explore, and really get to know the place and all the characters. Now, sometimes my characters tell me to turn right when the map says turn left. In such cases, I always listen to my characters! They have their own integrity, and that must be respected if they are going to feel true to my readers.

JL: You’ve often said that your work has two constant themes (that there’s a hero in each of us, and that nature is a wonderful friend, teacher, and inspiration). You’ve also referred to Merlin, the subject of so many of your books, as a “friend.” Which came first for you, the themes, or the character?

TAB: What a wonderful question! For me, the character comes first. And Merlin is an especially rich one.

I’ve been fascinated with Merlin ever since my first year as a student at Oxford, when I sat in the shade of an ancient English oak tree and read T.H. White’s Once and Future King. But even though I eventually named that oak “Merlin’s Tree”, I had no idea that twenty years later I’d have the chance to weave a few threads of my own into the marvelous tapestry of myth about Merlin. Life is really more surprising than legend!

So why has Merlin persisted in our minds and hearts? Why have people been telling stories about him, adding to his legend, for over fifteen hundred years? Well, here’s my theory. It’s because Merlin stands for three basic ideals—ideals we need today, more than ever: universality, humility, and the sacredness of Nature.

First take universality. When you look at the original Celtic tales, Merlin’s role was truly astounding. And unique. Despite all the chaos, warfare, plagues, and hardships of life in sixth century Britain, here came this wizard who actually succeeded in building bridges among all kinds of people—Druids and Christians, nobles and peasants, archbishops and old gray wolves. And now, in our own time, when so many people are bent on tearing humanity apart, Merlin gives us hope that we can still perhaps come together.

Then there is humility. There is always a tension in Merlin’s legends between the light and dark sides in humanity. And in Merlin himself. That is why, in the Celtic tales, he was given a saintly mother and a demonic father. And that is why, in my own tales of Merlin, he often grapples with his own dark side, his own flaws. All this makes him a wiser, more compassionate person—and a truly remarkable mentor.

And finally—Merlin’s wondrous connection with Nature. To him, the language of the river or the tree isn’t so far from his own; the echoing call of a wolf is full of wisdom. Humanity has always yearned to connect with the cosmos, to belong to the universe as wholly as light belongs to the stars. Merlin reminds us of that yearning, and inspires us to explore it.